The Bank of Canada is signalling interest rates will need to stay at super-low levels for longer than it previously thought, citing a deterioration in the economy that has reduced inflationary pressures and set back expectations for growth.

As expected, the central bank’s policy setting team kept the trendsetting interest rate at one per cent Wednesday, where it has been for almost two-and-a-half years.

But in a mild surprise, the bank went further by issuing a new advisory to Canadians and financial markets that the anticipated need to raise rates in the future is now less imminent.

It feels free to issue such an advisory, it said, because in part it is less worried about record levels of consumer debt and the housing market, both of which appear to be moderating. And inflation pressures, with evidence the consumer price index will stay around one per cent for some time, are at the lowest since the recessionary period.

“While some modest withdrawal of monetary policy stimulus will likely be required over time, consistent with achieving the two per cent inflation target, the more muted inflation outlook and the beginnings of a more constructive evolution of imbalances in the household sector suggests that the timing any such withdrawal is less imminent than previously anticipated,” the bank explained.

The interest rate statement and accompanying monetary policy report – a comprehensive analysis of global and Canadian conditions – constitute of a bit of a climb-down for the bank’s forecasting unit, which had been staying with its growth story for the economy as recently as October, when most private sector forecasters were downgrading projections.

The bank now says the just concluded fourth quarter of 2012 will see a below par growth rate of one per cent, rather than the 2.5 it had predicted.

And it downgraded growth by three-tenths of a point for both 2012 and 2013, to 1.9 per cent and 2.0 per cent respectively. The bank still has faith the economy will return to strength, however, starting this year and picking up speed in 2014, when growth will average 2.7 per cent.

The bank’s newest estimates appear more in line with the consensus of private sector economists, although it remains slightly sunnier than the International Monetary Fund, which released a new forecast Wednesday predicting Canada’s economy would advance by 1.8 per cent this year.

The Canadian central bank’s judgment is that the sharp downturn in growth at the second half of 2012 was due to weaker global markets for Canadian exports, uncertainty about how the U.S. would deal with its short-term budget crisis that kept business from investing, and temporary factors – such as shutdowns and pipeline bottlenecks in the energy sector. Along with lower prices obtained by western producers, the energy sector difficulties trimmed 0.4 percentage points from Canadian growth in the latter half of the year, the bank said.

The damage will have lasting impacts. The economy has more slack today than it did six months ago, and will need to the fall of 2014 to return to full capacity.

As well, Canada’s economy can no longer count on household spending and the housing sector to propel it forward.

In a change from previous reports, the bank says Canadian household debt is stabilizing at around the record 165 per cent of annual disposable income, and credit growth has sharply declined from a peak of 12 per cent in 2008 to 5.5 per cent in 2012, and 3.0 per cent in the three months to November. Home sales have fallen, as has construction activity, and prices may follow suit.

This is a mixed blessing. On the one hand, the trends are exactly what bank governor Mark Carney and Finance Minister Jim Flaherty repeatedly requested, given that an overheated housing market and high consumer debt puts the economy at risk long term. On the other hand, the bank worries that too much of a good thing will be the medicine that kills the patient.

“If there were a sudden weakening in the Canadian housing sector, it could have sizeable spillover effects on other areas of the economy,” the bank warns.

Still, there was good news in the policy report. The bank believes there are fewer imminent risks facing global economies, which should boost Canadian exports and business investment going forward.
“The bank projects a return to above-potential growth in the Canadian economy through 2013,” it says, “supported in particular by rebounds in business fixed investment and exports.”

It notes, however, that the improvements in these areas will not be major. 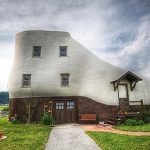 Would You Live in a House Like This?Real Estate Market News

Good News for the Village of RockwoodReal Estate Market News