Another big jump in building permits in March, reported on Monday, blew apart forecasts from economists who were expecting a decline for the month.

Statistics Canada said the value of permits issued in the country rose 4.7% on a seasonally adjusted basis to $6.8 billion. That followed a jump of 7.6% in February, which was revised up from the previously reported 7.5% gain.

Economists polled by Bloomberg expected a 1.5% decline in building permits for March.

Non-residential permits were up 13.9% to a value of $2.9 billion. That was driven by an 88.4% surge in institutional permits, which was largely a result of intentions to build government and medical facilities in Ontario.

Residential building permits were down 1.3% to $3.9 billion. That included a 1.7% decline for single-family homes, and 0.7% drop for multiple-housing structures.

“Although housing-starts data have been buoyant lately, the recent softening trend in residential permits suggests that the pace of home building may slow in the months ahead,” said CIBC World Markets economist Emanuella Enenajor in a research report. 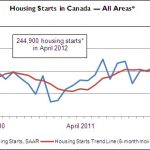