Home sales via Canadian MLS® Systems were down 6.5% in February. This marks the second consecutive monthly decline following the record set in December 2017 and the lowest reading in nearly five years. (Chart A) 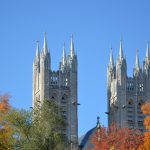