Bank of Canada governor Mark Carney elected today to keep the benchmark target for the overnight rate unchanged at one per cent, a level held at since September 2010.

Despite standing pat for the 13th consecutive policy session, the central bank offered a few hints that the outlook has improved enough to consider raising interest rates sooner rather than later.

The bank may have held steady, but the choice of words in the statement accompanying the decision itself “sent a clear signal that it may not stay there a whole lot longer,” BMO economist Doug Porter noted.

MAP Interest rates around the globe

The central bank tipped its hand most obviously near the end of the statement.

“Some modest withdrawal of the present considerable monetary policy stimulus may become appropriate,” the bank said Tuesday. That may not sound overly aggressive, but compared to previous statements, it’s tellingly hawkish.

In its outlook, the bank raised its forecast for Canada’s economy this year.

Slack’ in economy is tightening

The bank now expects the economy to expand by 2.4 per cent in 2012 and 2013, a rise from two per cent previously. That stronger growth in an environment of low rates is a recipe for inflation, something the central bank is mandated to keep in a range of between two and three per cent.

The bank also said that personal debt loads remain “the biggest domestic risk” to Canada’s economy, an additional sign the bank is getting closer to making good on its repeated warnings for Canadians to get their financial houses in order.

The bank also noted that some of the “slack” in the economy is tightening, meaning the economy is becoming more efficient — another sign the bank has leeway to act.

The Canadian dollar rose sharply following the statement, gaining almost a full cent to 101.05 cents US within minutes of the bank’s decision becoming public.

“The bank is clearly uncomfortable with keeping interest rates below inflation when household debt continues to grind higher, and with the economy poised to reach capacity by early next year,” Porter said. “At a minimum, the bank will be raising rates …sometime in the first half of next year.” 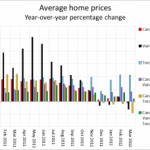 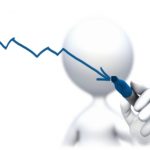