According to statistics provided by the MLS® System of the Guelph and District Association of REALTORS®, home sales numbered 270 units in October 2019. This was an increase of15.4%from October 2018 and stood just 17 transactions below the October record set back in 2016.

“Home sales picked up nicely over the spring and summer alongside an influx of much needed new supply, and that trend continued into the fall, with activity posting its second-best October sales figure ever behind 2016,” said Christianne Child, President of the Guelph and District Association of REALTORS®. “While inventories are no longer at the extreme lows seen in late 2016 and early 2017, they are nonetheless still well below average and the market is still tilted in favour of sellers, which is why prices have continued to move higher.”

By comparison, the benchmark price for townhouse/row units was $414,800, climbing 9.9% compared to a year earlier while the benchmark apartment price was $360,700, up a similar 9%. 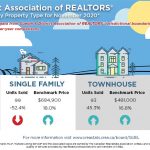