Home Prices Rise in Half of U.S. Cities as Markets Stabilize

Prices for single-family homes climbed in half of U.S. cities in the first quarter as real estate markets stabilized.

The U.S. housing market is showing signs of bottoming as improving employment and record-low mortgage rates boost demand while inventories of available properties tighten. At the end of March, 2.37 million previously owned homes were available for sale, 22 percent fewer than a year earlier, the Realtors said.

“The housing market is still depressed but it had a good quarter,” Patrick Newport, an economist at IHS Global Insight in Lexington, Massachusetts, said in a telephone interview today. “We’re on the mend but it’s still something that will take two or three years before we’re back to normal.”

The national median existing single-family home price was $158,100 in the first quarter, down 0.4 percent from the first three months of 2011, according to the Realtors group.

Kingston, New York, had the biggest decline, with the median selling price tumbling 22 percent in the quarter. It was followed by Stamford, Connecticut, with an 18 percent decline; Mobile, Alabama, at 14.7 percent; and Atlanta at 12 percent.

The median selling price is influenced by the mix of homes on the market and probably was boosted by a smaller share of transactions involving distressed properties. Those homes, which sell at discounts, accounted for 32 percent of first-quarter sales, down from 38 percent a year earlier.

Prices are more volatile than normal because they are affected by the prevalence of distressed sales and “sudden upswings” in buyer interest in some areas, said Lawrence Yun, the group’s chief economist.

“We have broad shortages of lower-priced homes in much of the country, with very tight supply in Western states for homes through the middle price ranges,” Yun said in the report. “This is good news for many sellers who wish to list now, or for those waiting for prices to improve.”

Fannie Mae, the nation’s biggest mortgage-finance company, today reported a $2.7 billion first-quarter profit after a $6.5 billion loss a year earlier, citing smaller declines in home prices as one of the reasons for improvement. The Washington- based company said that it won’t need Treasury Department aid to balance its books for the first time since it was seized by federal regulators in 2008. 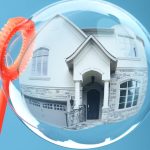 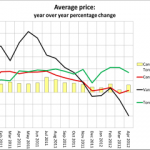