Housing starts performances in Ontario’s major markets continue to diverge from each other, according to the latest data released by the Canada Mortgage and Housing Corporation late last week.

Toronto’s total housing starts in February was a massive 72% lower compared to the same time last year, mainly due to the slowing pace of new condo construction and an observed consumer shift towards even more affordable housing.

“Fewer pre-construction sales on single-detached homes throughout 2018 will continue to result in fewer starts in 2019. Conversely, sales of new condominium apartment starts have been strong in 2017 and 2018 and these units will continue to break ground throughout this year at a varying pace.”

“A wider gap has developed between the number of multi-unit housing starts and single-detached starts because buyers had their purchasing power reduced in the past 6 to 12 months due to rising carrying costs.”

Meanwhile, new home construction in St. Catharines reached a 10-month high in February, with non-single-detached starts growing by 59% year-over-year, and overall starts going up by 15% during the same time frame. 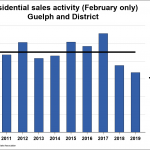